Attorney General Merrick Garland was one President Barack Hussein Obama’s choice for a lifetime appointment to the U.S. Supreme Court. He may yet be again if Congressional Democrats get their way somehow and pack the Supreme Court beyond its current nine justices. As Dementia Joe Biden’s AG he has proven no moderate as he was advertised to be as he seeks to eviscerate the U.S Constitution one amendment after another. Forget the Bill of Rights – it is just Russian misinformation.

Tucked away in the corner of the First Amendment written by old white male supremacists, you know, the guys who said we were all created equal and endowed by or Creator with certain unalienable rights, is a little tidbit about the right of the people peaceably to assemble and to petition the Government for a redress of grievances. Those little people who pay the taxes and fight the wars have over time developed this silly little idea that it applies not just to the federal government but to things like local school boards as well.

One benefit of the pandemic lockdowns of schools and so-called online learning is that these local yokels in flyover country got to see for once what their children were actually being taught and were not amused. They didn’t want their children taught that America was systemically racist, that black kids would be oppressed victims without hope and that white kids would be their oppressors without conscience.  They didn’t like their kids being taught gender was a choice and that a child could identify as more genders than Ben and Jerry has ice cream flavors. They particularly didn’t like their daughters being raped and sodomized in unisex bathroom by “woke” young males wearing skirts as elitist and indifferent school boards covered it up.

So parents began doing the unthinkable like showing up at local school board meetings and voicing their grievances to the shock and awe of Marxists who couldn’t understand why those they governed no longer consented, voicing such silliness as children belong to parents, not school boards. And that participatory democracy meant just that.

One of those parents was Scott Smith, who attended a June 22, 2021, Loudon County, Virginia, school board meeting with the intent to find out how his daughter could get raped and sodomized in a school bathroom without the school board’s apparent knowledge or concern. For his efforts, je got rougher treatment than his daughter’s transgendered rapist: A Virginia father who was arrested at a school board meeting has ripped Attorney General Merrick Garland for painting him as a domestic terrorist — saying he’d just been trying to raise the alarm about his daughter getting “sexually assaulted” in a school bathroom.

Scott Smith, 48, became a symbol of angry parents confronting school officials when he went viral at a June 22 meeting of the Loudoun County School Board as he was wrestled to the floor and arrested.

But on Tuesday, Smith told Fox News that he had been trying to raise the alarm about his daughter’s sexual assault — and only flipped out when officials and then another parent denied it.

It appears to be backed up by video of an arrest, which captured his wife shouting, “My child was raped at school and this is what happens!”

Smith told Laura Ingraham that he finally decided to speak publicly about his daughter’s ordeal because he says the same alleged attacker was charged with another similar attack — and because the AG suggested angry parents like him were “domestic terrorists.”

“That’s really scary, that our government will weaponize themselves against parents and they’re using my video across the nation to spread fear,” he said.

Our “woke” government believes that our children are the property of the state and that parents have no voice in their children’s education, healthcare or anything else. Government can teach them anything it wants to and forcibly vaccinate them if it chooses to. Virginia Gov. Terry McAuliffe, a Democrat running ror another term this November, recently lashed out at anti-CRT efforts, asserting that "I don't think parents should be telling schools what they should teach."  And if you object to a social environment of gender fluidity and self-identification, then you are a bigot. If you are a parent who challenges the state’s edicts, you are a domestic terrorist who cam be body-slammed, forcibibly handcuffed and put in jail. 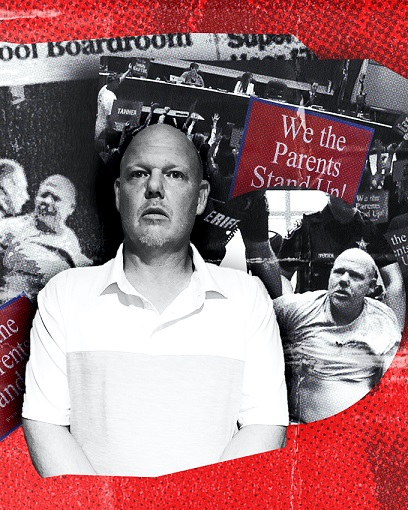 BLM and Antifa terrorists can burn city blocks to the ground, loot and destroy businesses, create billions of dollars in property damage and be responsible for dozens of deaths but they are not domestic terrorists according to AG Merrick Garland. Don’t investigate the criminals, terrorists, drug dealers and human and sexual traffickers pouring across oursouthern border. According to Garland, the real domestic terrorists are parents who clap, chant, boo and carry signs at school board meetings:

Making note of a supposed "spike" in harassment and intimidating behavior directed at public school officials, Attorney General Merrick Garland has instructed the FBI to be on the lookout for angry parents demanding accountability at school board meetings.

On Monday, Garland sent a memo to the federal law enforcement agency directing it to coordinate with the nation's 14,000 school districts. This action comes after the Biden administration received a plea from the National School Boards Association (NSBA) to protect schools from the "imminent threat" of parents sending "threatening letters and cyberbullying" school officials. The association considers such activities to be akin to "domestic terrorism."

"As these acts of malice, violence, and threats against public school officials have increased, the classification of these heinous actions could be the equivalent to a form of domestic terrorism and hate crimes," wrote the NSBA.

Has some great number of teachers, principals, and district leaders come under violent attack? Of course not. What both the Justice Department and the concerned school boards are really talking about it is the increased number of recent community meetings that have featured angry feedback from parents. These parents are sick of COVID-19 mitigation efforts that have relegated actual students to afterthought status within the education department: the farce of virtual learning, mandatory closure when asymptomatic cases are detected, ceaseless masking. Young people who have the least to fear from the pandemic—the severe disease and death rate for the under-18 crowd is extremely low—have been forced to make tremendous educational and social sacrifices to bend the curve of COVID-19. Families are fed up with a public education system that puts the needs of students last, and they are speaking up about it.

The Constitution Mr. Garland, begins wiyj three words that says it all – we the people not the school boards or you the AG. Parents are fed up about their kids being force-fed critical race theory and gender identification nonsense while being forcibly masked and forcibly vaccinated even though the health threat they pose is almost nonexistent. And they object to their daughters being raped in school bathrooms to the callous indifference of school boards, legacy media and government officials:

What people did not know is that weeks prior on May 28, Smith says, a boy allegedly wearing a skirt entered a girls’ bathroom at nearby Stone Bridge High School, where he sexually assaulted Smith’s ninth-grade daughter.

As a result of the viral video showing his arrest, Smith became the poster child for what the National School Boards Association has since suggested could be a form of “domestic terrorism”: a white blue-collar male who showed up to harangue obscure public servants on his local school board.

“If someone would have sat and listened for thirty seconds to what Scott had to say, they would have been mortified and heartbroken,” Lancaster said.

Merrick Garland thinks Smith is a domestic terrorist as is any parent concerned about the safety, health and education of their children. And to thibk Merick Gaeland migh have been on the Supreme Court, 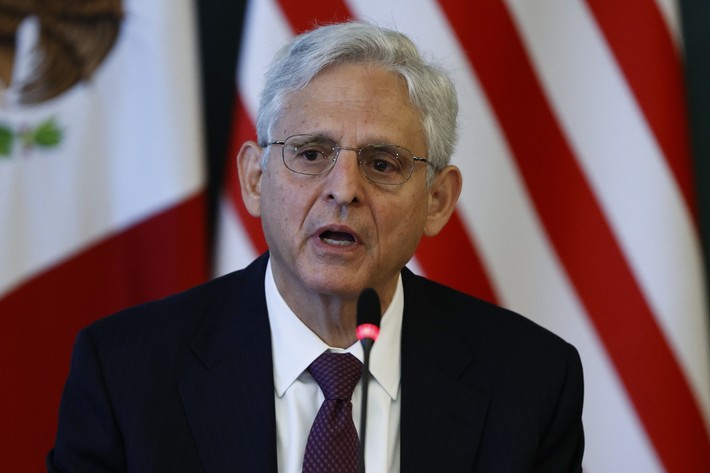 President Obama nominated Garland for the Supreme Court vacancy created by the passing of Justice Antonin Scalia. Garland was chief judge of the U.S. Court of Appeals for the District of Columbia, a Bill Clinton appointee. As Carrie Severino, chief counsel for the Judicial Crisis Network, which created an ad campaign against Garland’s confirmation,  noted in National Review, Garland was also an anti-gun zealot targeting the Second Amendment:

… Garland has a long record, and, among other things, it leads to the conclusion that he would vote to reverse one of Justice Scalia’s most important opinions, D.C. vs. Heller, which affirmed that the Second Amendment confers an individual right to keep and bear arms.

Back in 2007, Judge Garland voted to undo a D.C. Circuit court decision striking down one of the most restrictive gun laws in the nation. The liberal District of Columbia government had passed a ban on individual handgun possession, which even prohibited guns kept in one’s own house for self-defense. A three-judge panel struck down the ban, but Judge Garland wanted to reconsider that ruling. He voted with Judge David Tatel, one of the most liberal judges on that court. As Dave Kopel observed at the time, the “[t]he Tatel and Garland votes were no surprise, since they had earlier signaled their strong hostility to gun owner rights”

The Constitution is not safe on Merrick Graland’s watch. Neither are our children or our basic freedoms.

"Wow, no takers!  Suzie just got back on and saw this. Coffee and a chat sounds great to me.…"
More…
Loading ...