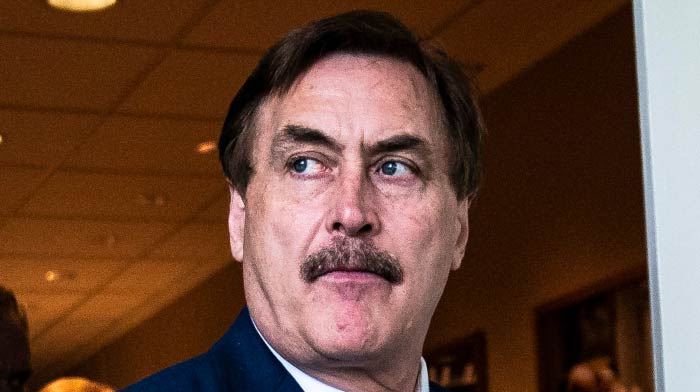 Our American Marxists, both in and out of the administration of “Dementia” Joe Biden, have learned that if you can’t cancel people who are too big to cancel, you can at least make their financial life difficult and it almost impossible for them to do business, as they are once again trying to do with Trump-supporting conservative entrepreneur and Mt Pillow CEO Mike Lindell by putting pressure on his banks to stop doing business with him/

They tried to destroy his company by coercing major retailers to drop his product lines and media outlets to refuse his advertising. Now they are trying to debank him, in a sense defund My Pillow and Mike Lindell:

War Room reported that in the latest attempt to silence conservatives, Minnesota Bank and Trust has informed Mike Lindell that he has to close the bank accounts he has for Lindell Recovery Network, Frank Speech, Lindell-TV, MyStore, and several other entities. Why? Because of the “reputational risk” that he supposedly brings to the bank because of his political role.

Steve Bannon is asking the “War Room” posse to politely but firmly let the bank’s officers know that they are making a mistake and that they will pay a price with lost business if they insist on de-banking Lindell.

The name of the bank is Minnesota Bank&Trust but the mother ship bank is Heartland Financial snd they are trying to weaponize the banking industry, as is the Biden administration, to destroy this “woke” institution’s political opponents:

Mike Lindell, known for speaking out again about corruption in the political system, Lindell has been banned by social-media platforms, and major retailers have stopped selling his products because of his efforts to expose fraud in the 2020 election through documentaries, symposiums, and other activism….

Bannon played a recording of a telephone call between a top executive at Minnesota Bank & Trust and Lindell’s controller. 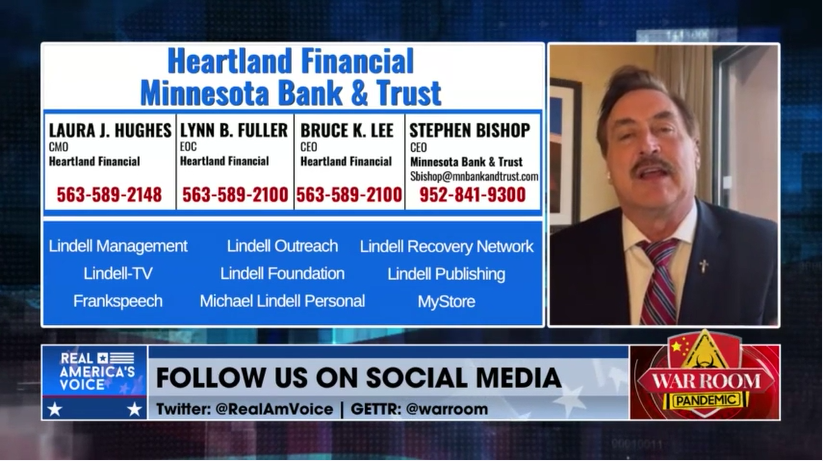 The executive asked in the call why the bank, a subsidiary of Heartland Financial, is associated with “someone who could be in the news.”…

“They’re telling us you need to leave our bank,” Lindell told Bannon. “They said they want FrankSpeech gone … in a week, and they want all the rest gone in 30 days.

Lindell is once again refusing to comply with the woke culture’s current demands. He even has had to fight with his supposed friends, like the folks at Fox News.

For a time My Pillow commercials even disappeared from Fox News after Lindell pulled them after Fox refused to run a 60-second ad for his upcoming live-streamed event at which he was expected to delve deeply into and present evidence concerning 2020 election fraud:

MyPillow CEO Mike Lindell said his company is pulling its ads from Fox News because the network rejected a proposed commercial for a “cyber symposium” he plans to broadcast online.

Mr. Lindell told The Washington Times on Friday that he directed Fox News to drop his pillow ads from its programming after the network refused to run a 60-second ad for his upcoming live-streamed event.

“I said, OK, then you just will take off all MyPillow ads, immediately and indefinitely,” Mr. Lindell told The Times. The bedding company spent about $50 million advertising on Fox last year, he said. 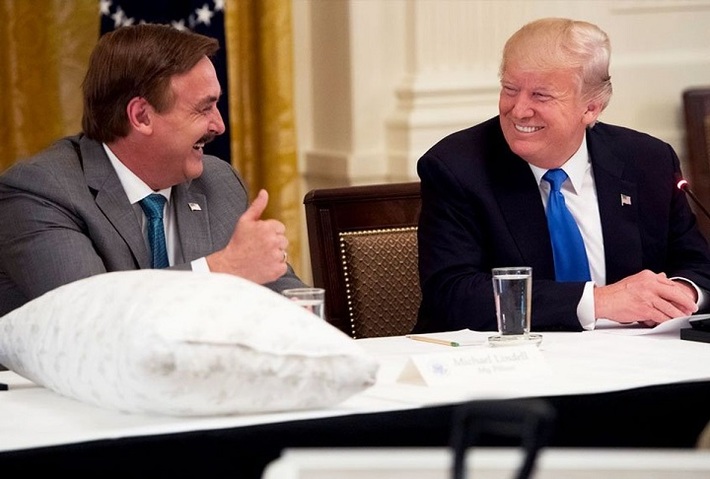 We must never forget that Fox News canceled the great Lou Dobbs, unceremoniously pulling his last show on which Lindell was going to present his case for 2020 election fraud. Fox succumbed to legal pressure from those who had their hands in the ballot boxes and voting machines.

Lou Dobbs had been announcing that he was going to air the Lindell findings of how unconstitutional state law changes, coupled with actions by corrupt election officials, and the use of voting machines open to the Internet and ripe for hacking and manipulation, combined to alter the election results Friday night but he never got the chance. As the Los Angeles Times, the first to break the news of Dobbs’firing, reported:

Fox News Media has canceled “Lou Dobbs Tonight,” the program hosted by television’s staunchest supporter of Donald Trump and of his assertions of voter fraud in the 2020 election, The Times has learned.

Dobbs’ program, which airs twice nightly at 5 and 7 p.m. Eastern on the Fox Business Network, will have its final airing Friday, according to a Fox News representative who confirmed the cancellation. Starting next week, the program will be called “Fox Business Tonight,” with rotating substitute hosts Jackie DeAngelis and David Asman, who filled in for Dobbs on Friday….

The cancellation comes a day after voting software company Smartmatic filed a $2.7-billion defamation suit against Fox News and three of its hosts — Dobbs, Maria Bartiromo and Jeanine Pirro. The company claims the hosts perpetuated lies and disinformation about Smartmatic’s role in the election, damaging its business and reputation….

Dobbs also gave free rein to Trump lawyers Rudolph Giuliani and Sidney Powell to push conspiracy theories about the election that were either rejected or never presented in court. Giuliani and Powell also are defendants in the Smartmatic defamation suit.

On his Nov. 30 show, Dobbs told Powell he believed Trump needed to take “drastic action, dramatic action to make certain that the integrity of this election is understood or lack of it, the crimes that have been committed against him and the American people. And if the Justice Department doesn’t want to do it, if the FBI cannot do it, then we have to find other resources within the federal government.”

Despite boycotts and bans, Lindell has survived, using his marketing skills to end-run his persecutors, some of whom did not:

Bed Bath and Beyond has learned the truth of the phrase, “Go woke and go broke.” The liberal company will close 37 stores this year. The company canceled Mike Lindell and his popular MyPillow products. 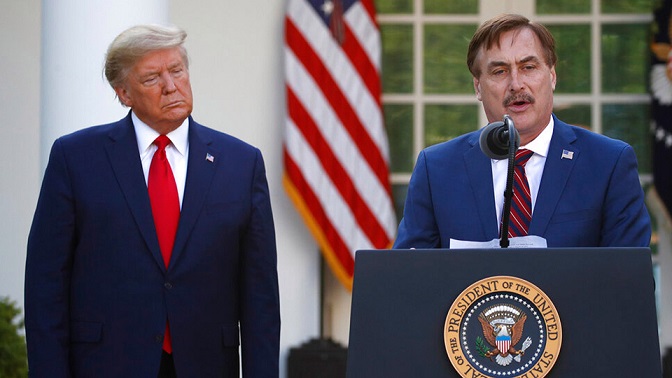 “US-based omnichannel domestic retailer Bed Bath & Beyond has revealed plans to close 37 locations across 19 US states this year,” a retail news site reported. “The closures will affect seven stores in New York, five in California, four in Washington and two each in Georgia, Arizona, Minnesota, Pennsylvania and Texas.”.

The company succumbed to pressure from far-left activists who objected to Lindell’s claims about the security of the 2020 election and the results.

Bed Bath and Beyond’s stock price collapsed after last year after it announced its retail boycott and investors and customers fled in droves:

Amid a boycott in response to its politically motivated decision to drop Mike Lindell’s MyPillow products, shares of Bed Bath & Beyond plunged 36.4% at the close of trading Thursday. The retail chain suffered its biggest one-day loss since going public in June 1992.

The consumer organization Media Action Network launched the boycott of Bed, Bath & Beyond after the retail chain stopped selling Lindell’s products due to his support of President Trump’s claim that fraud affected the outcome of the 2020 election. Retailers Wayfair and Kohl’s also have stopped selling MyPillow products.