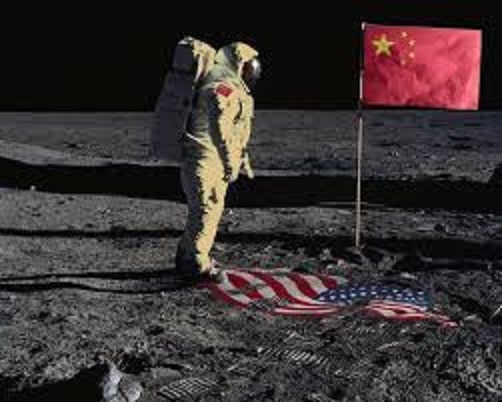 At a press conference last February, Press Secretary Jen Psaki gave a mocking response to the question of the future of the newest military branch, the U.S. Space Force, under the Harris/Biden Administration, obviously clueless about the military value of space and uninterested in it:

Ranking member of the House Armed Services Committee has called on the White House press secretary to "immediately apologize" for her response to a Space Force question during a Tuesday press briefing.

Alabama Republican Rep. Mike Rogers took offense to Jen Psaki’s answer in jest to a question about the future of Space Force under the Biden administration.

"Wow. Space Force. It’s the plane of today," Psaki said, appearing to compare the question to one posed by a reporter two weeks ago, asking about Air Force One’s color scheme…

Space Force was enacted by Congress in December 2019 as an extension of the U.S. military and aims to protect U.S. special interests in space capabilities.

"It’s concerning to see the Biden administration’s press secretary blatantly diminish an entire branch of our military as the punchline of a joke, which I’m sure China would find funny," Rogers said in a statement.”

It is also concerning that the latest test of a nuclear-capable hypersonic missile which came as a big surprise to U.S. military and intelligence officials too busy tracking domestic terrorists and white supremacists. While Biden naps in Delaware, Beijing is developing hypersonic and other weapons that can outmaneuver U.S. defenses to launch a nuclear attack on the United States and its military assets around the globe without warning, not even a heads-up to Joint Chiefs of Staff Gen. Mark Milley”.

U.S. intelligence agencies were caught by surprise when China secretly tested a nuclear-capable low-orbit hypersonic missile in August, the Financial Times reported Saturday. The weapon circled the globe before descending upon its target, missing by about two dozen miles.

The Pentagon is aware China has been working on hypersonic weapons technology and other advanced missile systems, unburdened by any of the arms control treaties that impede competing programs in the United States and Russia, but the August test – conducted without advance notice, warning, or publication – reportedly stunned analysts who thought the Chinese were much further behind in the orbital arms race. 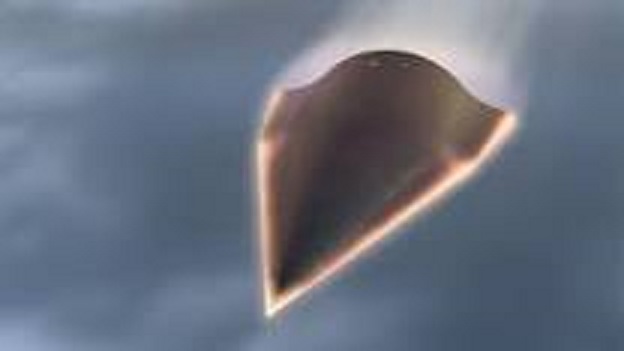 “We have no idea how they did this,” said one of the Financial Times’ U.S. intelligence sources. Others described China’s progress as “astounding” and “far more advanced than U.S. officials realized.”

As a Joe Biden at an earlier stage of cognitive decline told Barack Hussein Obama at an Obamacare event, this is a BFD. Just as Black Hawk Down and our withdrawal from Somalia convinced Osama bin Laden of U.S. weakness and lack of staying power or will, Dementia Joe’s Afghan Benghazi which led to the death of13 U.S. service personnel and abandonment of our Afghan and NATO allies, leaving Americans, the strategic Bagram airbase near China and billions in military equipment behind, tells China that this might be a good time to press on in making the South China Sea a Chicom lake and preparing for its when-not-if invasion of Taiwan. China’s hypersonic missile test was a warning to the U.S. to keep off the grass:

The Global Times said it is “inevitable that China will take an upper hand over the U.S. military strength” in areas such as Taiwan and the South China Sea – and Beijing plans to “improve the quality of its nuclear deterrence to ensure that the U.S. completely eliminates the idea of nuclear blackmail against China at any critical moment.”

China has been testing hypersonic glide vehicles for some time particularly as a means of attacking U.S. carrier battle groups and their Aegis missile defense destroyer and cruiser escorts. This is just the latest example of hoe China has been using both technology theft and the trade deficit to finance and further its military capabilities. 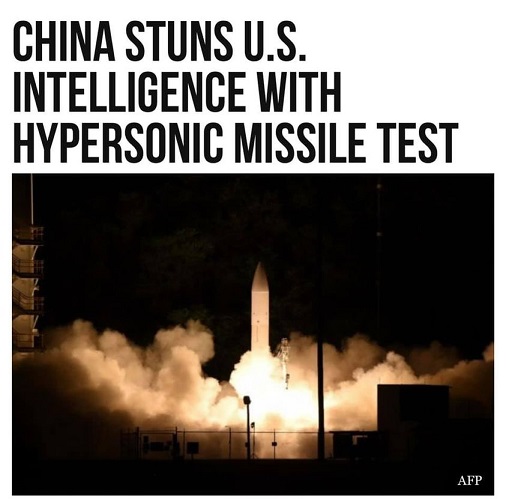 This is a strategic game-changer. Hypersonic vehicles are dangerous enough but what China has done is to marry such a vehicle to an orbital booster to create what is known as a fractional orbital bombardment system. These vehicles would be in orbit literally over our heads to be deployed when needed to maneuver around U.S. defenses virtually without warning:

Some have claimed that this orbital hypersonic missile system does not truly change the threat we face since China can already strike the U.S. homeland with its existing arsenal. Yet the key difference is that the U.S. can largely detect and track those missiles, a capability that enables the U.S. to organize a retaliatory strike before incoming warheads reach their targets. This concept of assured nuclear retaliation is fundamental to deterrence.

However, systems able to avoid early-warning satellites and radars raise the prospect of a disarming surprise attack that cripples the nation’s ability to respond. This undermines the core of deterrence, and, for this reason, such systems have been widely regarded as destabilizing.

This testing comes as China is manning its own space station indicating that China sees space as a battlefield and not as a place to watch tadpoles grow in zero gravity. It also comes as Beijing is deploying new missile silos not far from the now-abandoned Bagram Air Base:

Over the last several months, it has come to light that China is building hundreds of new long-range missile silos that could potentially accommodate missiles armed with multiple warheads. According to U.S. senior officials, China’s missile forces could soon exceed Russia’s, and nuclear superiority over the U.S. is now a realistic possibility.

China proceeds at top speed towards weapons designed to counter our once huge technical advantage and qualitative superiority. Case in point is the testing of a hypersonic glide vehicle (HGV), dubbed the WU-14 by the Pentagon.               The U.S. Navy is particularly concerned, as a deployed HGV would be a potent weapon against U.S. carrier battle groups in the Western Pacific. A Chinese anti-ship ballistic missile, the road-mobile DF-21D, called a “carrier-killer” by some, is operational and poses a potent threat, but it is countered by our sea-based Aegis missile defense which has demonstrated remarkable capabilities.

"The beauty of the HGV (hypersonic-glide vehicle) is that it can perform hypersonic precision strikes while maintaining a relatively low altitude and flat trajectory, making it far less vulnerable to missile defenses," says Rick Fisher, a China military affairs expert with the International Assessment and Strategy Center.

The WU-14 is launched as the upper stage of a Chinese ballistic and released at the edge of space. It then reenters the atmosphere somewhat like our now retired space shuttle but at speeds of Mach 10 (ten times the speed of sound) as it maneuvers toward its intended target. An HGV like the WU-14 is capable of executing a pull-up maneuver after reentering the atmosphere and maneuver aerodynamically as it approaches its target in a relatively flat glide. Because the vulnerable reentry phase occurs earlier than with a traditional ballistic missile, it will be detected later than a ballistic warhead and iits maneuverability makes it harder to hit.

Such vehicles “are extremely difficult to defend against because just the time is so compressed between initial detection, being able to get a track, being able to get a fire control solution, and then just being able to have a weapon, that can intercept them in some way just because of the speed at which they’re moving,” Lee Fuell, technical director for force modernization and employment at the National Air and Space Intelligence Center, told the congressional U.S.-China Economic And Security Review Commission.

Any Chinese ballistic missile can carry the WU-14, but experts say shorter-range missiles which the Chinese have in abundance, many trained on Taiwan, appear more likely to carry it to its intended target – our aircraft carriers. “”I suspect the HGV is intended more for anti-ship or other tactical purposes than as a strategic bombardment system against American cities,” says analyst Dean Cheng of the Heritage Foundation.

The Navy is working on directed energy weapons, such as a ship-borne laser, as a possible countermeasure. Of particular concern is a combined attack on a carrier battle group using both the DF-21D and the WU-14 combined with other more conventional assets.

As Fuell states in the Security Review Commission report, “If that (the WU-14) is combined with more traditional ballistic missile attacks  forcing a target to defend against very high aspect warheads coming in this way at the same time they have to defend against low-altitude very high speed targets coming in (another) way, it makes the defense problem orders of magnitude worse for the defender.”

Hypersonic glide vehicles are being developed by China in pursuance of  Beijing's goal to push the U.S. out of the western Pacific, establish regional dominance along the Pacific Rim and then push outward from there to one day dominate the earth.

Someone had better tell Space Force and Jen Psaki to kick the tires and light the fires.