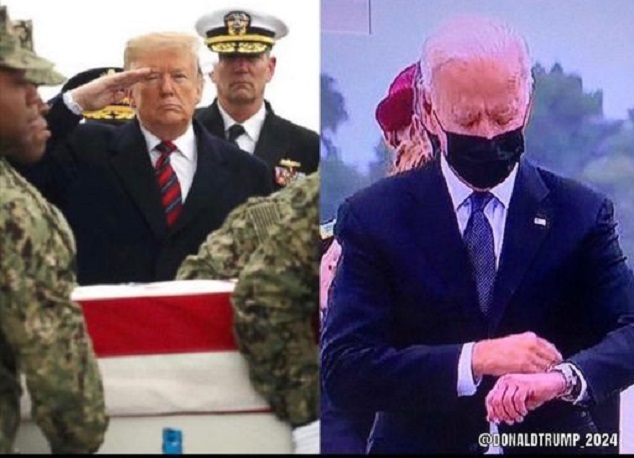 Dementia is not a foreign policy. Watching Joe Biden’s Afghan performance is like imagining Captain Queeg as Chief of Naval Operations. Both have lost their bearings, except that Queeg was a fictional character in the iconic war movie “The Caine Mutiny” and Biden is actually commander-in-chief as he throws away 20 years of sacrifice in blood and treasure for nothing, creating a terrorist state armed with America’s best weapons, with our mortal enemies China, Russia, Iran, and North Korea chomping at the bit in anticipation of the strategic consequences of Biden’s incompetence.

Biden is a perfect storm of incompetence, incoherence, and incontinence. Boxers or briefs? It depends. He speaks to reporters he has been "instructed" to call on and then when asked about Afghanistan says he doesn't want to talk about it right now. Then "walkway Joe" turns and walks away, hoping the door is still where he remembers it was. Is this cognitive decline, or simply his clueless cruelty and malevolence. Or both.

Impeachment would be futile, some will say. At best you’d wind up with a President Kamala Harris who just might pick House Sp[eaker Nancy Pelosi as VP. But there must be accountability for this ghastly tragedy.   So far the only one to pay any price is a 17-year veteran colonel who demanded accountability for this debacle from his superiors.

But this fish also rots from the head. For this fiasco alone Biden deserves impeachment. Are we really ready to let Biden call the shots for another three years? The truth musy come out.

He is the commander-in-chief. He is responsible. So what if we end up with Kamala Harris? The dead demand accountability. This is worse than any Trump Ukraine phone call. This is worse than Trump telling supporters to "peacefully and patriotically" march to Capitol Hill to protest a demonstr6bly stolen election. This is creating a well-armed terrorist state at the expense of American lives. This is Israel, Ukraine and Taiwan they are on their own and Iran, Russia, and China a woke America is sleeping on the job.

Speaking  of phone calls, how was President Trump’s famous Ukraine phone call an impeachable offense and Biden’s phone call with former Afghan President Ashraf Ghani not be? In that call, Biden confessed he knew Afghanistan was collapsing and wouldn’t do anything except to get Ghani to lie for him:

A leaked phone call between President Joe Biden and former Afghan President Ashraf Ghani, first published by Reuters Wednesday, shows Biden pushing a false narrative about the strength of the Taliban. Worse, he asked Ghani to lie for him.

The men spoke for roughly 14 minutes on July 23. On August 15, Ghani fled the presidential palace, and the Taliban entered Kabul. Since then, tens of thousands of desperate Afghans have fled and 13 U.S. troops and scores of Afghan civilians were killed in a suicide bombing at the Kabul airport during the frenetic U.S. military evacuation. 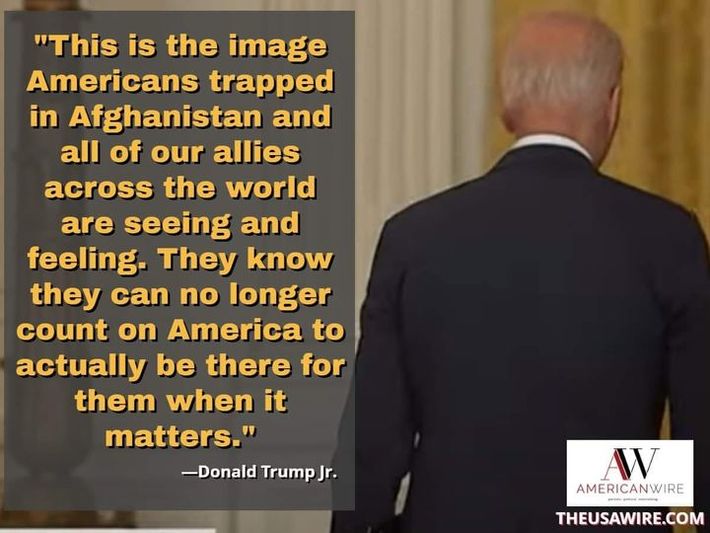 In the call, Biden offered aid if Ghani could publicly project he had a plan to control the spiraling situation in Afghanistan. “We will continue to provide close air support, if we know what the plan is,” Biden said. Days before the call, the U.S. carried out air strikes to support Afghan security forces, a move the Taliban said was in violation of the Doha peace agreement.

In much of the call, Biden focused on what he called the Afghan government’s “perception” problem. “I need not tell you the perception around the world and in parts of Afghanistan, I believe, is that things are not going well in terms of the fight against the Taliban,” Biden said. “And there is a need, whether it is true or not, there is a need to project a different picture.”

“We are facing a full-scale invasion, composed of Taliban, full Pakistani planning and logistical support, and at least 10-15,000 international terrorists, predominantly Pakistanis thrown into this,” Ghani said.

Biden knew his policies in Afghanistan were failing. H knew his arbitrary Aug. 31 deadline for U.S. withdrawal had triggered the cascading fall of provincial capitals. He lied to the American people about Afghan strength and U.S. intentions. He lied about not leaving anyone behind. And then when his policies got 13 U.S. servicemen killed, he callously exploited and mocked the grief of the families mourning the sons and daughters whose deaths he had caused.

When President George Herbert Walker Bush glanced at his watch during a debate with Bill Clinton and H. Ross Perot it was considered a major scandal, evidence of his elitism and unfitness for the presidency. It was not good optics, as the latest catchphrase goes, and it was only a political debate and nobody died. One cannot say the same thing about Joe Biden receiving the bodies of 13 fallen U.S. soldiers at Dover AFB  slain as the result of Biden’s cowardly and chaotic withdrawal from Afghanistan in order to pave the way for a selfish and ghoulish photo op on the coming 2oth anniversary of the Sept. 11, 2001 terror attack organized in and from Afghanistan. 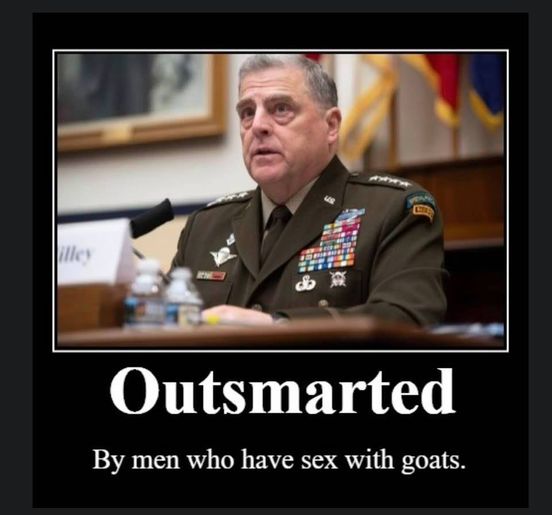 As each casket was solemnly unload with great dignity, there was Corn Pops’s arch enemy checking his watch each time as if he were conducting some efficiency reviewing or wondering how long nap time might be delayed., a disgusting display of cluelessness made worse by the fact that it was his brain dead (no pun intended) policies that jed to their deaths. Did the man who can’t complete a coherent sentence or though forget where he was and what was happening? As reported by The U.S. Sun:

Mark Schmitz, the dad of Lance Corporal Jared Schmitz, and Darin Hoover – the father of Staff Sergeant Taylor Hoover – claimed the president looked at his watch not just once.

He said Biden would look at his watch after each salute was released.

Schmitz added: "I leaned into my son’s mother’s ear and I said, 'I swear to God if he checks his watch one more time.'"

He claimed it was the “most disrespectful” thing he had ever seen.

Schmitz alleged that Biden talked about his own son Beau rather than Jared in his meeting with the president.

Beau, who was an Iraq War veteran, died in 2015 from a brain tumor.

Some relatives of the dead troops were angry with Biden and didn't want to meet him, The Washington Post reports.

Roice McCollum said she, her sister, and her father joined Rylee McCollum’s pregnant wife Jiennah on the trip to the ceremony.

All apart from Jiennah didn’t meet with Biden as they “held the president responsible for McCollum’s death."

Roice said Jiennah left the meeting “disappointed” as she claimed Biden brought up his son Beau in the conversation.

She told the outlet: “It struck the family as a scripted and shallow, a conversation that lasted only a couple of minutes in ‘total disregard to the loss of our Marine.'”

Roice added: “This did not need to happen.”

None of it needed to happen – neither the cut and run withdrawal, the shameful entrusting of our security to or mortal enemies, the Taliban, or Biden’s shameful performance on their return of 13 young Americans who found out that having a commander-in-chief with dementia does not end well. He trapped them in an indefensible one runway airport in the middle of a hostile city of four million people. 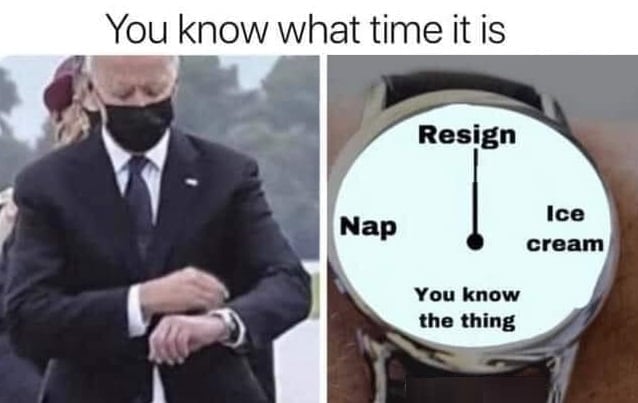 The man who told George Stephanopolis that we would not leave Americans behind did precisely that. There was no valid military reason to abandon Bagram Air Force Base except for an arbitrary troop level number  Biden pulled out of a hat. Bagram was much more than a better evacuation point. It was also a strategic airbase from which Iran, Russia, and China can be reached.  It is within spitting distance from China's oppressed Uighur Muslim population and the new ICBM missile silos China is building. Giving it up for the sake of a troop-level number picked out of thin air and an artificial withdrawal date was militarily stupid. Joint Cheifs of Staff Mark Milley went out of his way to apologize on national television for walking with President Trump to a historic Washington D.C. church Antifa and BLM rioters had tried to burn down. He should apologize, and resign for signing off on the worst plan since Gen. George Armstrong Custer said, “What Indians?" If Milley had been looking for Taliban and ISIS-K terrorists as hard as he was looking for white supremacists, maybe 13 U.S. soldiers would be alive today. Biden left behind upwards of $89 billion worth of U.S. weapons and facilitated the release if 5,000 Taliban and ISIS-K terrorists from two prisons in Afghanistan As noted, so far the only one to pay any price is a 17-year veteran colonel who demanded accountability for this debacle from his superiors.

Biden gave material aid and comfort to a terrorist enemy. Impeach him.