LIBS MARCH FOR “MY BODY, MY CHOICE” ON ABORTION NOT MASKS OR VACCINES 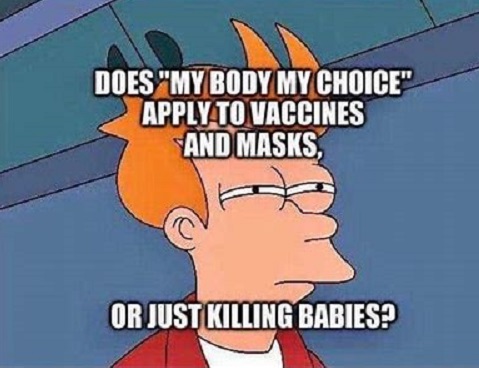 Liberal hypocrisy, entitlement and bad science were on display in Washington D.C. on Saturday, October 2 when pro-abortion liberal women, or should we call them anti-birthing persons, marched to protect legalized abortion-on-demand against possible SCOTUS reconsideration at the same time liberals push to force vaccinations on children against scientific evidence and the wishes of justifiably cautious and skeptical parents. Many carried signs proclaiming the liberal mantra “my body, my choice” even as they pursue vaccine passports and the firing of any who refuse to comply with their mandates. As France24 reported:

Carrying signs with slogans like "my body, my choice, my right" thousands of women rallied Saturday in Washington at the start of a day of nationwide protests aimed at countering a conservative drive to restrict access to abortions.

The perennial fight over the procedure in America has become even more intense since Texas adopted a law on September 1 banning almost all abortions, unleashing a fierce counterattack in the courts and in Congress, but with few public demonstrations until now.

Two days before the US Supreme Court, which will have the final say on the contentious issue, is due to reconvene, nearly 200 organizations have called on abortion rights defenders to make their voices heard from coast to coast…. The court has already refused to block the Texas law and has agreed to review a restrictive Mississippi law that could provide an opportunity to overturn the 1973 Roe v Wade precedent, which guaranteed the legal right to an abortion up until a fetus is viable outside the womb.

Progressives defend their double standard by claiming that not being masked or vaxed can threaten many others with death while abortion affects only an individual women’s body. That is so wrong on so many levels starting with the fact that abortion affects two bodies, one facing immediate and not just potential death. That second body, that of an unborn child, is a genetically unique human being. When you abort that human life, you are also terminating the lives and generations of the future that will spring from that child’s existence. Kill that unborn baby and you are also killing generations of human lives. If your great-grandmother had had an abortion, how many lives would have been lost to the future? Zero? One? Many. This is not a zero-sum game,

There is no scientific study affirming the efficacy of masks and the latest “guidance” is that we wear up to three layers of these face diapers. We are told we must protect the vaccinated from the unvaxed by forcibly vaccinating the unvaccinated, a statement that makes no sense. And never mind that Covad-19 survivors have natural immunity, a condition the mandatory vaxers ignore, and which has resulted in virtual herd immunity, just as they ignore medical conditions that preclude getting vaccinated.

It is laughable and obscene that those responsible for making it possible for this country to kill an entire generation of children in their mother’s womb advocate mandating masks for everyone regardless of condition or need in order to – wait for it – “save lives”. 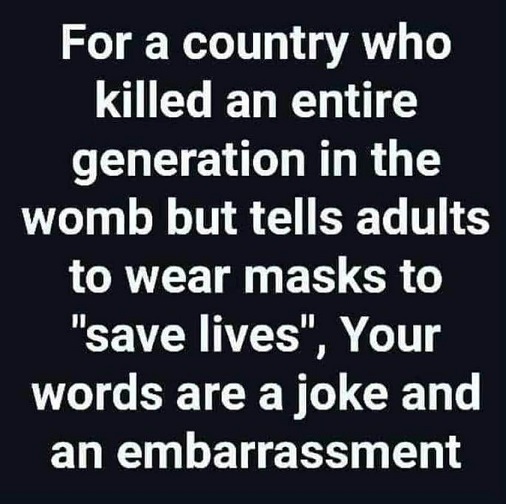 An entire generation of children have had their education, their social development and their futures stunted, their potential diminished by mask mandates and lockdowns. Children are social animals. They deserve to grow up seeing their peers’ faces, their smiles. And they deserve to be born.

I have often said that if ultrasound pictures of the unborn had been available in 1973, the Roe v. Wade decision would have been quite different. It is hard to talk about “lumps of tissue” and “collections of cells” when one can actually see a leg kicking, a hand reaching, a mouth sucking. Or listening to a heartbeat.

The world’s tiniest surviving baby, weighing just 8.6 ounces when she was born in December, went home this month as a healthy 5-pound infant.

The baby, nicknamed Saybie by medical staffers at Sharp Mary Birch Hospital in San Diego, was born there at just over 23 weeks’ gestation. Her mother had developed preeclampsia, and doctors decided to perform an emergency cesarean section, according to hospital officials.

Saybie,  separated from her mother’s body. now enjoys the full constitutional protections if personhood. If her mother had not developed her condition, Saybie could have been legally aborted. The question must be answered of when Saybie became a human being. Our humanity and human rights should not be dependent on technology. Pro-abortion advocates pro-abortion advocates are unwilling or unable to define either when life begins or by what mysterious process merely passing through the birth canal bestows humanity and human rights upon us.

This is why Democrats are apoplectic about bills banning abortion when a heartbeat is detected. They fear such bills as attempts to “rollback” Roe V. Wade. But if the Supreme Court ever rules such bans are constitutional, Roe V. Wade is dead, repealed by the establishment of personhood. 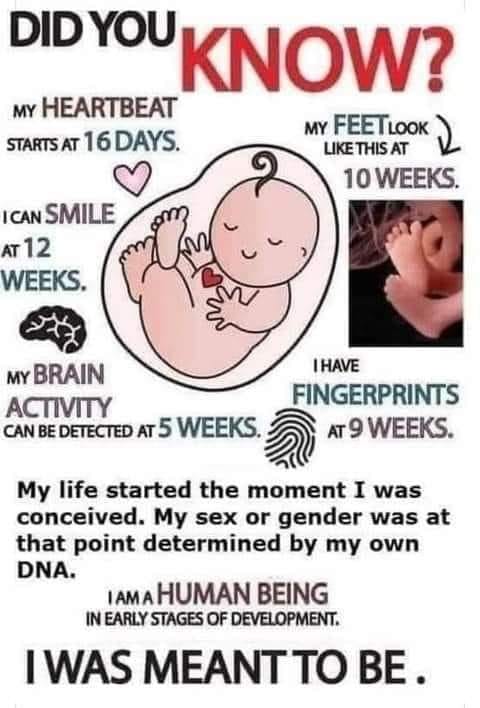 Supreme Court Justice Harry Blackmun said and feared such an eventuality in writing the majority opinion in Roe V. Wade:

"We need not resolve the difficult question of when life begins. When those trained in the respective disciplines of medicine, philosophy, and theology are unable to arrive at any consensus, the judiciary, at this point in the development of man's knowledge, is not in a position to speculate as to the answer."[p160]

Man’s knowledge has developed in the last four decades to the point where life-saving procedures can be performed on the unborn. We are now at the point where that question of when human life can and must be answered as Justice Blackmun feared it would be one day, ending Roe:

The appellee and certain amici argue that the fetus is a “person” within the language and meaning of the Fourteenth Amendment. In support of this, they outline at length and in detail the well-known facts of fetal development. If this suggestion of personhood is established, the appellant’s case, of course, collapses, for the fetus's right to life would then be guaranteed specifically by the Amendment. The appellant conceded as much on reargument. [p156]

This is why also oppose requiring that a mother requesting an abortion view an ultrasound of their unborn child which strips away the pro-abortion myth that abortion is of no more consequence than the removal of a mole. Advances in medical technology have shifted the abortion debate in the pro-life direction, and even the liberal media have started to notice.

As Patrina Mosley, Director of Life, Culture and Women's Advocacy for the Family Research Council, notes:

What Roe. v Wade couldn’t predict was the advancement of scientific technology capable of detecting the intricate design inherent in the unborn child and the astonishing level of development taking place earlier and earlier in the womb….

In addition, we are now seeing that early-stage embryos with abnormalities can still develop into healthy babies if given the chance to live. Thanks to 4D ultrasound technology, we can see an unborn child at 14 weeks respond to the sound of music. Previously, many believed a baby in the womb could not hear music until 26 weeks. 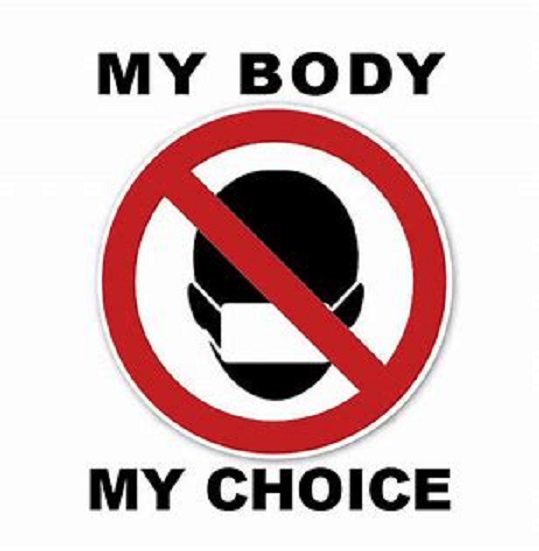 At 20 weeks we can scientifically prove that a baby has developed a mature enough nervous system to feel pain. The Marist Poll indicates that 63 percent of Americans now support a ban on abortion after 20 weeks of pregnancy, and 17 states have already enacted some form of a “Pain-Capable bill” to protect unborn children who are able to feel pain from the brutal abortion methods used at this stage.

Even MSNBC “Morning Joe” host Joe Scarborough recently had to admit: “You are seeing poll numbers move on abortion for banning abortions after 20 weeks.” He went on:

“Why? Because for the past decade, younger Americans have been going in and they have been seeing 3-D imagery where they can look into the womb. If some activist said, ‘Your child is a lump,’ I must tell you, I’ve had four kids, I’ve never once had a doctor go to me, ‘we’ve got your lump, let me show you your lump, look at your lump’s profile.’ This is an example of science, technology changing that is going to change the politics of abortion. This is an issue that culturally is going to change. Americans, younger voters are going to become more conservative on abortion because they see their child very early on in the womb.”

Science is indeed changing the politics of abortion. Our right to life should be determined by our inate humanity and not on the latest technology. Blackmun’s fears are being realized. The “suggestion of personhood” is being established and hopefully, Roe V. Wade will soon join the Dred Scott decision on the ash heap of bad legal precedent.