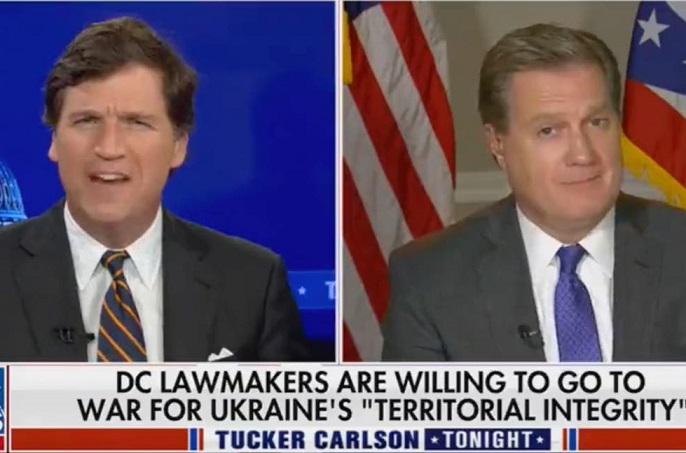 Tucker Carlson would have been a perfect adviser to the late Neville Chamberlain, the British Prime Minister who sold out Czechoslovakia in 1938 at Munich in an attempt to appease the Nazi dictator Adolf Hitler and waive a meaningless piece of diplomatic paper proclaiming “peace in our time.” Instead of confronting Hitler when it was relatively easy and when his own generals did not trust him, we got World War II, the Holocaust, and unfathomable carnage.

On his Wednesday night Fox News show, Tucker Carlson treated Ukraine like Chamberlain treated Czechoslovakia, a faraway country of no strategic importance, not worthy of fighting and dying for, and certainly not worth ticking off the brutal dictator trying to take it over:

Rep. Mike Turner (R-OH) may have gotten a more combative interview than he bargained for when he appeared with Tucker Carlson on Wednesday night.

Last week Turner and 14 other Republican members of Congress wrote a letter to President Joe Biden calling on him “to immediately provide support to the Ukrainians” after satellite images showed a buildup of Russian military “Tucker, thank you so much for bringing attention to this issue,” said Turner after Carlson welcomed him to the show. “This is one the mainstream media is not going to be reporting and is incredibly important for people to understand what Russia is doing and really the threat to the United States and the threat to the United States’ allies.” forces along Ukraine’s northern border.

After saying that many military families watch his show, Carlson told Turner, “I wonder if you could explain to them why it is in America’s interest that their kids risk their lives in Ukraine.”

Turner said Ukraine is an important strategic ally of the United States, which committed to Ukraine’s territorial integrity. He alluded to the Budapest Memorandum signed by the U.S., Russia, and Ukraine (among other states) in 1994. Russia violated that agreement when it annexed Crimea in 2014…

Carlson would hear nothing of Turner's logic, even though Turner was only advocating for the same kind of aid against aggression that FDR provided Churchill after Chamberlain pulled a Carson and mucked things up. It’s not like we are going to deploy the 82nd Airborne to Live.  Carlson stopped short of saying that Putin, like Hitler after Munich, would have no further territorial demands in Europe. He pushed on, to the point of asking why we would want to Push Putin into the arms of China:

“But hold on,” Carlson interjected. “Why would we take Ukraine’s side and not Russia’s side? It’s a sincere question. If you’re looking at America’s perspective, why? Who’s got the energy reserves? Who’s the major player in world affairs? Who’s the potential counterbalance against China, which is the actual threat? Why would we take Ukraine’s side? Why wouldn’t we be on Russia’s side? I’m totally confused.”

“Well, clearly,” Turner shot back. “Maybe if you get out a map and you look to see where the Black Sea is and Romania, where we have our missile defense system, with Greece, and Turkey, the entrance to the Black Sea and then from there you look at what the conflicts have already been on Russia’s areas there. Ukraine is a democracy. Russia is an authoritarian regime that is seeking to impose its will upon a validly elected democracy in Ukraine and we’re on the side of democracy. That’s what people were chasing those planes Afghanistan and wouldn’t be chasing Russian ones.”

Tucker is being incredibly naïve and foolish here and shows us the difference between being glib and being articulate. His arrogance shines through and this isn’t the first time he has gone off the deep end, most notably “canceling” noted attorney Sydney Powell because she wouldn’t provide gathered evidence that the 2020 election

was electronically manipulated to him personally rather than in a court of law. 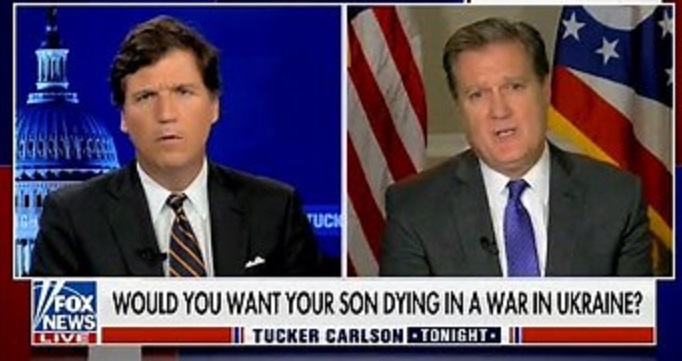 When China moves on Taiwan, Mr. Carlson, and it will, it will have been encouraged of our strategic stupidity of abandoning Afghanistan and its strategic air base at Bagram, as well as our abandonment of Ukraine at your urging.

Presumably, you wouldn’t want to aid Taiwan either, lest it drive China into the arms of Russia Right? When Russia invades Ukraine, China will be at its side. When China invades Taiwan, Russia will be at its side. Tucker Carlson is refusing to learn from history and would condemn us to repeat it. Carlson’s Ukraine policy fits Winston Churchill's observation that "An appeaser is one who feeds a crocodile, hoping it will eat him last."

Certainly, the Ukrainians could have put to good use the billions in state-of-the-art weaponry left behind after  Dementia Joe Biden’s calamitous and precipitous withdrawal from Bagram and Afghanistan.  We could have sent the helicopters and Humvees and a treasure trove of goodies straight from Kabul to Kyiv where the weapons would be giving the Russians Carlson worries so much about headaches:

Aside from the fact that the Biden Administration pulled our military out while leaving unarmed and defenseless American Citizens behind, the enormous list of weapons and true military hardware that was gift-wrapped and handed to the Taliban is of great concern. The list of military equipment left behind in Afghanistan as a result of this haphazard military evacuation is extensive and includes the following:

2,000 Armored Vehicles Including Humvees and MRAPs 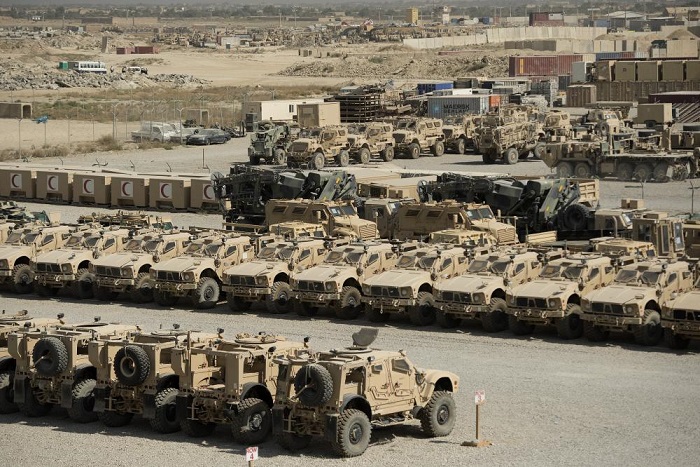 Pallets with Millions of Dollars in US Currency

Certainly, Ukraine might have found this equipment useful. Such equipment could still be provided and more. We could certainly sell them some Abrams tanks made in a facility in Lima, Ohio that President Donald J. Trump kept open as he rebuilt the U.S. military.

President Trump is colluded with Russia by reversing the Ukraine policy of the Obama Administration, which stood silently when Putin’s Russia annexed Crimea and attacked Ukraine, and sell the Ukrainians lethal defensive weaponry, including anti-tank missiles designed to destroy Putin’s Russian tanks in the hands of separatist rebels:

President Donald Trump is expected to announce his approval of a plan to sell anti-tank missiles to the Ukrainian government, a move that would mark a significant escalation in lethal U.S. military support for Ukrainian forces battling Russian-aligned forces in the border region, four State Department sources tell ABC News. …

The sale of anti-tank missiles, which could possibly include the U.S.-made Javelin system, provoked a strong reaction from Russia on Saturday, saying it "crossed the line," and could threaten to derail Trump’s calls for better relations with Moscow. 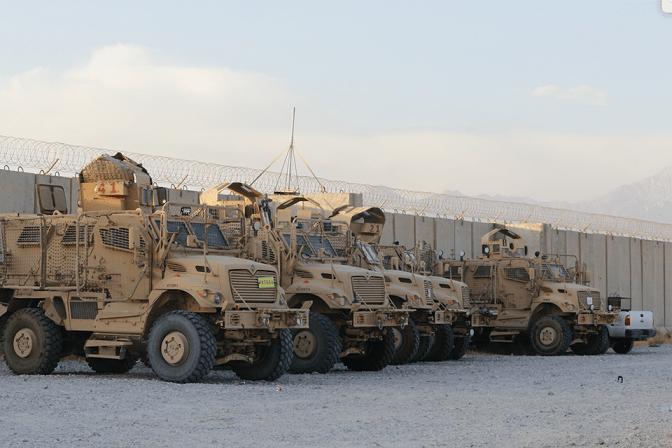 Trump was not worried, like Carlson is, about pushing Russia into the arms of China. Trump knew Russia was already there. Nor did Trump start a war with Russia. Nobody’s child was sent to fight in and die for Ukraine. President Trump, unlike President Obama, was well aware that it is Russian President Vladimir Putin’s expressed view that the demise of the Soviet Union was one of the greatest disasters of modern times. His actions in Ukraine in conjunction with massive Russian rearmament show his desire to reassemble the old Soviet Union:

In his annual address to parliament in 2005, old KGB boss emeritus Putin made the grotesque claim that the "demise of the Soviet Union was the greatest political catastrophe of the century," demonstrating a nostalgia for what he considers the good old days.

Back in 2012 when Romney put Russia at the top of the geopolitical threat list, President Obama gave a mocking response more worthy of a former community organizer rather than the leader of the free world. As I noted in an editorial I wrote for the Investors Business Daily, “Cold War Not Over As Russia, China Unite Over Ukraine“:

"You said Russia. Not al-Qaida. You said Russia," Obama rebuked him regarding our biggest threats. "The 1980s are now calling to ask for their foreign policy back because ... the Cold War's been over for 20 years," said the president who promised the Russians more flexibility as he disarmed the United States.

If the Cold War was over, somebody forgot to tell Moscow, for their belligerence towards Ukraine is straight out of the playbook of Nikita Khrushchev and Leonid Brezhnev. They ruthlessly repressed with Soviet armor the 1956 Hungary rebellion and the 1968 Prague Spring in Czechoslovakia.

Russia is trying to reassemble the old Soviet Union. Tucker won’t fight for Ukraine or help it defend itself. Who else would he abandon? The Baltic States? Poland? Russia is ready to divide up the world with Communist China just it tried yo do so with Nazi Hermany in their infamous pact. Carlson is rightly concerned about our sovereignty and securing our open border. But if Russia is allowed to gobble up Ukraine as China gobbles up Taiwan it may not matter.