Four top members of the Taliban's new interim government are former Guantanamo Bay prisoners who were freed by the Obama administration in a prisoner exchange for Army deserter Bowe Bergdahl.

The four new officials were members of the hardline 'Guantanamo Five' who were traded to free Bergdahl from the Taliban-aligned Haqqani network in 2014.

The four men, who also took part in direct negotiations with the US at the Doha summit last year, spent about 13 years in the military prison camp before they were freed in a trade for the admitted deserter, who was captured by insurgents after wandering off his post.

On September 11, 2001, the Taliban ruled Afghanistan with an iron fist and harbored terrorists that would kill thousands of Americans and start a 20-year war there and another long war in Iraq, wars in which thousands more Americans would be killed.. On September 11, 2021, thanks to dementia-ridden Joe Biden and his staff of leftist loons, the Taliban once again rule the roost in Kabul, after an enormous expenditure of American blood and treasure, and play host to al-Qaida and a reconstituted ISIS to spread terror, tyranny and death around the world.

While the “woke” Chief of Staff Gen. Mark Milley looks for white supremacists in the ranks and House Speaker Nancy Pelosi Capitol Hill “insurrectionists”,  a new base for global terror has been resurrected, aided and financed by Iran, protected by Russia and China. Huge stores of military equipment and ammunition have fallen into Taliban hands thanks to a senile old fool who ignored President Donald J. Trump’s conditions=based withdrawal schedule in favor of a rush to the exits that left seven strategic military bases in hostile hands.

Biden ignored intelligence warnings to rush a politically timed withdrawal he kept secret from our Afghan and NATO allies. Awoken from his Camp David slumber, he said in a 15-minute script written by others, he said the buck stopped with him but blamed everyone but himself sort of like the British blaming the French for Dunkirk.

The Taliban are freeing all the prisoners wr captured in Afghanistan, just like America’s Taliban, the Democrats have emptied our jails, defunded and neutered police, established no=cash bail, and refuse to [rosecute and imprison even the most hardened criminal. Our open border enriches drug cartels as we import Covid, fentanyl, and undocumented Democrats.

The Democrats have a soft spot for criminals, cartels, terrorists and traitors. Flashback to Biden/Obama.s release of five top Taliban commanders, their “dream team” of terrorist leaders. These weren’t just the rank-and-file types but were the equivalent of our secretary of defense and other high officials. We were assured they would never return to the battlefield but would be content to binge-watch episodes of “The View” while in a retirement village in Qatar. But, as the Daily Mail remembers, the reality was quite different:

The mastermind behind the Taliban's takeover of Kabul was released from Guantanamo Bay under Barack Obama's presidency in 2014 despite resistance from the Pentagon, it has been revealed.

Khairullah Khairkhwa was one of five Taliban commanders released from the detention camp off the coast of Cuba by Obama in exchange for American soldier Bowe Bergdahl.

The former president guaranteed the US people that the so-called Taliban Five would be sent to Qatar and incapable of doing any damage in Afghanistan.

However, earlier this year Khairkhwa ended up brokering the terms of the withdrawal of troops despite intelligence reports sent to Obama and Biden after his release,

Say what? A terrorist once jailed at Guantanamo Bay, was not only free, but a leader I arranging the terms of our

surrender in an Afghanistan he was supposedly not allowed to return to? Yet that is the sad and tragic reality that precipitated  the debacle in Kabul according to the New York Post:

Soon after gaining their freedom, some of the notorious Taliban Five pledged to return to fight Americans in Afghanistan and made contacts with active Taliban militants there. But the Obama-Biden administration turned a blind eye to the disturbing intelligence reports, and it wasn’t long before the freed detainees used Qatar as a base to form a regime in exile.

Eventually, they were recognized by Western diplomats as official representatives of the Taliban during recent “peace” talks.

Earlier this year, one of them, Khairullah Khairkhwa, actually sat across the table from President Biden’s envoy to Afghanistan, Zalmay Khalilzad, in Moscow, where Khairkhwa was part of the official Taliban delegation that negotiated the final terms of the US withdrawal. The retreat cleared a path for the Taliban to retake power after 20 years….

After raiding the presidential palace in Kabul, a group of armed Taliban fighters told Al Jazeera that they were arranging to bring back their Gitmo-paroled leadership from Qatar upon securing the capital. One unidentified fighter, who blasted America for “oppressing our people for 20 years,” claimed he had also been locked up at the Guantanamo Bay facility. It’s more evidence that Gitmo catch-and-release policies facilitated the fall of Afghanistan to the enemy that Washington vowed to crush after 9/11. 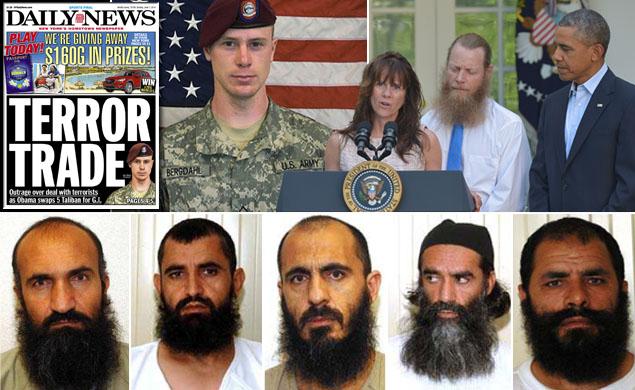 The Biden/ObamaTaliban dream team trade for traitor Bowe Bergdahl set the current debacle in motion. Obama and Biden preferred deserters like Bowe Bergdahl to heroes like Pat Tillman, trading terrorist Taliban leaders who slaughter Americans for traitors, welcoming and consoling Bergdahl’s parents at the White House while he ignored Bergdahl’s desertion in the heat of battle in Afghanistan.

That Bergdahl was a deserter and a traitor should never have been in doubt, yet it was, partially due to President Obama sending National Security Adviser Susan Rice, who spread the Benghazi video lies on the Sunday talk show circuit, to appear on the June 1, 2014 broadcast of ABC’s “This Week to tell two more lies, that Bergdahl was a good soldier and that trading five top Taliban commanders would not endanger U.S. security. As Breitbart reported:

Regarding the desertion allegations, she said Bergdahl, “served the United States with honor and distinction. And we’ll have the opportunity eventually to learn what has transpired in the past years.”

Rice also said that “assurances relating to the movement, the activities, the monitoring of those detainees [released in exchange for Bergdahl] give us confidence that they cannot and, in all likelihood, will not pose a significant risk to the United States. And that it is in our national interests that this transfer had been made.”

In fact, the Taliban trade of the terrorist equivalent of four-star generals does and has jeopardized U.S. security and was done to exploit Bergdahl’s captivity to help Obama to get the worst of the worst out of Guantanamo to facilitate his campaign pledge of closing the facility. That Bergdahl was a deserter and a Taliban sympathizer should never have been in doubt, judging by the universal condemnation of those who served with him. Investor’s Business Daily (IBD) noted that fact and editorialized that Obama feared a court-martial because it could lead to him being charged with providing material assistance to a terrorist enemy:

Every one of the men who served with Bergdahl or tried to find him and who have spoken out publicly has said he was clearly a deserter.

Indeed, the uncontestable fact is that Bergdahl walked away from his post in a time of war, leaving his weapon and gear behind. He was not out for a walk to relieve stress or clear his head.

"Bowe Bergdahl deserted during a time of war, and his fellow Americans lost their lives searching for him," former Sgt. Matt Vierkant told CNN. At least six soldiers died in operations looking for Bergdahl. 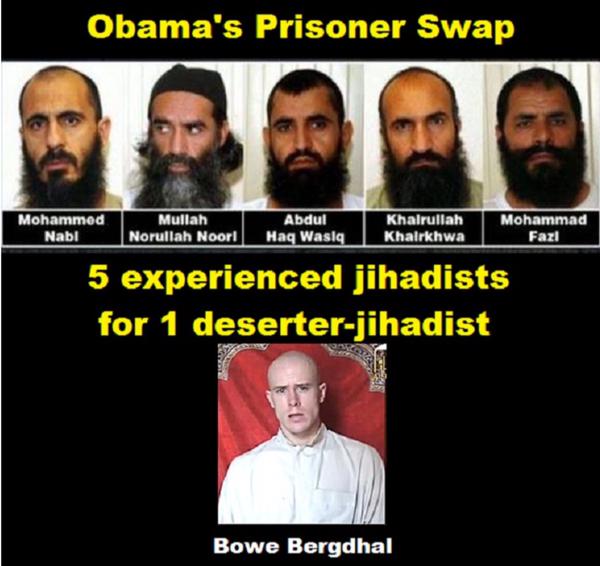 Biden failed to give our NATO and Afghan allies a heads up or an explanation afterwards, not talking to world leaders before or after his Afghan disaster which is still unfolding. He abandoned Bagram and Kandahar in the middle of the night, leaving behind Blackhawk and Apache helicopters and other military equipment for our enemies to find and use. Those who  say yje Afghan Army wouldn't fight should ask themselves if they would fight after this betrayal, after all their air support had been removed. Niden stupidly did this in the middle of the fighting season instead of the cold and inhospitable winter when there might be time to react.

As a result of Biden’s perfidy, it is now a question of when, not if, China will invade Taiwan. Israel is now never more alone as Iran, with Biden’s help, marches toward a nuclear weapon. Our NATO allies will never trust us to defend them, particularly the Baltic states. ISIS and al-Qaida will reconstitute in their reborn home, eyeing America’s open borders as safe passage to carry out another 9/11.

Just as 9/11 was spawned in the mind of Osama bin Laden whose witness of Bill Clinton’s shameful withdrawal from Somalia convinced him of America’s cowardice and weakness, Biden’s incompetence in Afghanistan will likely lead to more war and death and a dangerous path for America.

Was Bowe Bergdahl worth it, Mr. President?

The Way I See It:Under Federal law, Biden and his accomplices should all be charged with reckless…
See More

"I  got silenced a lot on the general open forum on NextDoor but a friend started a PRIVATE GROUP,…"
More…
Loading ...