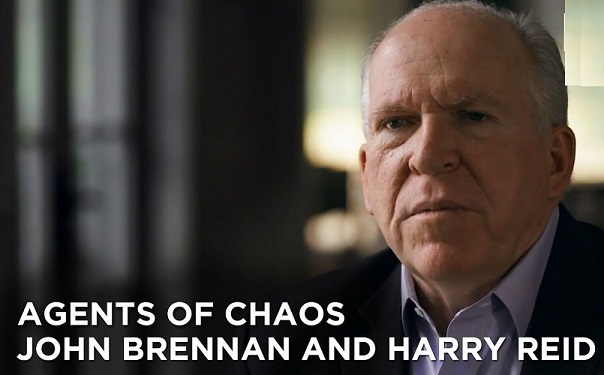 The nickname “Dirty” was well-earned by the late Sen. Harry Reid. He was a masterfully corrupt and manipulative politician who would lie through his devilish smile to achieve his political ends. Case in point was the lie he admitted telling, as the Washington Post relates, in 2012 about Mitt Romney, an attempt to influence the presidential results:

One of the strangest incidents of the 2012 presidential campaign was when then-Senate Majority Leader Harry M. Reid accused then-Republican presidential nominee Mitt Romney of having not paid any taxes over the past decade. That Reid made that allegation from the floor of the Senate made it even odder.

The problem with Reid's allegation? It's just not true. We know that, at least in 2011 and 2010, Romney did pay taxes. How do we know that? Because Romney released his tax returns for those years. In 2011, Romney paid $1.9 million in taxes; in 2010, he paid slightly more than $3 million in taxes.

Our own Fact Checker gave Reid Four Pinocchios for his "no taxes" claim. PolitiFact gave the claim a "Pants on Fire" rating.

Yet Reid (D-Nev.) not only refuses to retract the allegation but also seems to take great pride in it. When pressed by CNN's Dana Bash last year about continuing to defend a statement that is not true, Reid responded, "Romney didn't win, did he?"

Four years later, in 2016, Reid would have a chance to help spin the hoax of all time with avowed Communist and CIA chief John Brennan, spinning the tale and pushing the lie that Donald J. Trump was colluding with the Russians, an idea perhaps incubated during Brennan’s secret trip to Moscow in March 2016, as reported by American Thinker.

What has been established is that, like Reid, John Brennan is a malicious and conspiratorial liar, a ringleader of the deep state coup whose secret trip to Moscow lay at the heart of the “collusion delusion” origins. As Breitbart News reported:

The Russians say he did make such a trip, and while some might say, well, these are the same Russians that helped put together the Steele dossier filled with “salacious and unverified” material, and may once again be playing with us, there is evidence that Brennan, the man who voted for Communist Gus Hall for president, did make a Russia trip for purposes unknown at the inception of the deep state coup.

High-ranking Russian officials claim that CIA Director John Brennan visited Moscow on March 14 to meet with Russia’s federal intelligence agency. A CIA spokesman allegedly clarified that the meeting had nothing to do with Russia’s withdrawal from Syria.

“It’s no secret that Brennan was here,” claimed Russian Deputy Foreign Minister Oleg Syromolotov. “But he didn’t visit the Foreign Ministry. I know for sure that he met with the Federal Security Service (the successor agency to the Soviet KGB), and someone else.”

No further remarks clarify what Brennan was allegedly doing in Moscow or what he discussed with the FSB. Syromolotov insists it had nothing to do with Russia’s withdrawal from Syria. 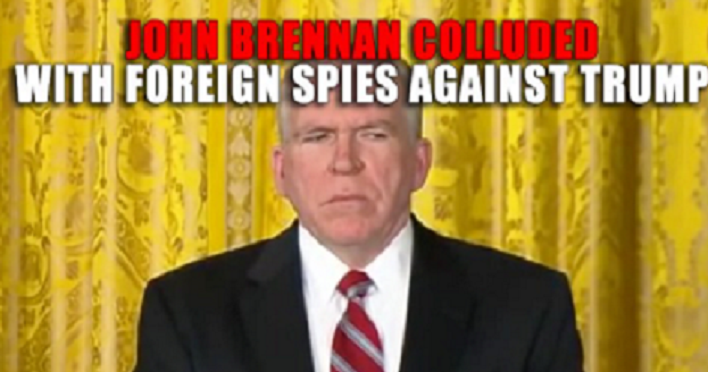 What happened after  Brennan’s trip to Moscow is fascinating. Brennan would “brief” Reid and the rest, as they say, is history. Brennan’s briefing of Sen. Harry Reid, which included information from the Steele dossier, certainly is a key indicator of his participation in the campaign to keep and/or kick Donald Trump out of the White House:

“According to “Russian Roulette,” by Yahoo! News chief investigative correspondent Michael Isikoff and David Corn, the Washington bureau chief of the left-wing Mother Jones magazine, Brennan contacted Reid on Aug. 25, 2016, to brief him on the state of Russia’s interference in the presidential campaign. Brennan briefed other members of the so-called Gang of Eight, but Reid is the only who took direct action.

Two days after the briefing, Reid wrote a letter to then-FBI Director James Comey asserting that “evidence of a direct connection between the Russian government and Donald Trump’s presidential campaign continues to mount.”…

Reid’s letter referred to some public reporting about Trump campaign associates’ links to the Kremlin, but he also included a reference to information that may not have been made public at the time. He cited allegations that were included in the infamous Steele dossier about Carter Page, an adviser to the Trump campaign at the time.

It would seem that the trip to Russia we should have investigated was not Carter Page’s, but rather John Brennan’s. As Kimberly Strassel writes at the Wall Street Journal:

More notable, Mr. Brennan then took the lead on shaping the narrative that Russia was interfering in the election specifically to help Mr. Trump—which quickly evolved into the Trump-collusion narrative. Team Clinton was eager to make the claim, especially in light of the Democratic National Committee server hack. Numerous reports show Mr. Brennan aggressively pushing the same line internally. Their problem was that as of July 2016 even then-Director of National Intelligence James Clapper didn’t buy it. He publicly refused to say who was responsible for the hack, or ascribe motivation. Mr. Brennan also couldn’t get the FBI to sign on to the view; the bureau continued to believe Russian cyberattacks were aimed at disrupting the U.S. political system generally, not aiding Mr. Trump.

The CIA director couldn’t himself go public with his Clinton spin—he lacked the support of the intelligence community and had to be careful not to be seen interfering in U.S. politics. So what to do? He called Harry Reid. In a late August briefing, he told the Senate minority leader that Russia was trying to help Mr. Trump win the election and that Trump advisers might be colluding with Russia. (Two years later, no public evidence has emerged to support such a claim.)

But the truth was irrelevant. On cue, within a few days of the briefing, Mr. Reid wrote a letter to Mr. Comey, which of course immediately became public. “The evidence of a direct connection between the Russian government and Donald Trump’s presidential campaign continues to mount,” wrote Mr. Reid, going on to float Team Clinton’s Russians-are-helping-Trump theory. Mr. Reid publicly divulged at least one of the allegations contained in the infamous Steele dossier, insisting that the FBI use “every resource available to investigate this matter.” 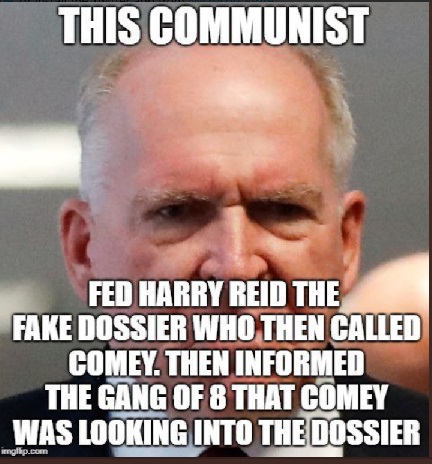 With Harry Reid pushing the FBI of David Comey, using information provided by John Brennan, the move to unseat a duly elected President of the United States was well underway. Comey would first have to entrap incoming Nation Security Adviser Michael Flynn, who would have nipped the coup in the bud for, coming out of the intelligence community himself, he knew the likes of John Brennan and James Clapper well and where the bodies were buried. Once that was done, the plot of Jarry Reid and John Brennan to unseat Trump could proceed. As Dan Calabrese writes at Canada Free Ptess:

The goal of Brennan and Reid wasn’t just to get an FBI investigation rolling, but also to make sure the public was aware of it. That’s why Christopher Steele ran to Michael Isikoff behind the FBI’s back and pushed this story, which was in turn used by the FBI to justify to the FISA court why they supposedly needed a wiretap warrant against Carter Page.

The point was to plant in the public’s mind the idea that Trump was under investigation for colluding with the Russians, and to let that notion set in six weeks ahead of the election. Apparently, Brennan and Reid gave little consideration to what might happen with this investigation in the event Trump won the election and became the FBI director’s boss. But of course, that’s exactly what happened.

So if you’re wondering why none of Robert Mueller’s indictments have anything to do with collusion between the Trump campaign and Russia, it’s because Mueller inherited from James Comey a dishonestly conceived investigation based on absurdities invented by Obama’s CIA director and pushed by Obama’s biggest ally in the United States Senate. Mueller has to indict someone for something so he can maintain the fiction that this investigation was ever about anything real. But none of these indictments support the original premise, because the original premise is wholly unsupportable.

The only question is when we will finally see some dot-connecting that reveals how Barack Obama himself may have been involved with pushing this phony investigation, and with seeking to wiretap a Trump campaign official based on-premises he knew were completely false. The Nixon campaign used burglars to spy on their political opponents. The Obama administration 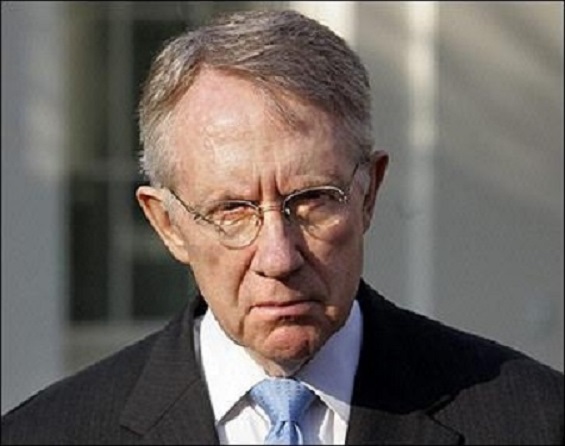 abused the authority of federal law enforcement to spy on theirs.

The answer is obvious, and the only thing that can make it even worse than that is the realization that the sleaziest of all politicians, Harry Reid, was at the center of it.

The plot of Reid and Brennan ultimately failed, Trump was not removed through impeachment, but it hampered a presidency whose staggering domestic and foreign policy accomplishments might have been even greater, enough to overcome the 2020 election theft that was also underway.

Should the tide turn in 2022 and 2024, and if John Durham’s investigation finally bears fruit, Donald J. Trump, the once and future President, will lead the nation to the truth, and that truth shall restore or freedom.

Daniel John Sobieski is a free lance writer whose pieces have appeared in Investor’s Business Daily, Human Events, Reason Magazine and the Chicago Sun-Times among other publications.