Manchin rails against eliminating filibuster, says he's not 'going to be part of blowing up this Senate'

Manchin says he is not a "roadblock" in the Senate

Will not vote to weaken filibuster: Sen. Manchin

Sen. Joe Manchin, D-W.Va., on Sunday pushed back against progressive Democrats who call him a "roadblock" to their liberal proposals, emphasizing he is "not going to be part of blowing up this Senate."

CNN's "State of the Union" anchor Dana Bash asked Manchin how he would respond to Democrats who say that he is one of the "main roadblocks" to President Biden passing his "ambitious agenda," prompting Manchin to say, "I'm not a roadblock at all."

"I am not going to be part of blowing up this Senate of ours or basically this democracy of ours or the republic that we have," Manchin said, referring to the Democratic push to eliminate the filibuster. "If we have a 51-vote threshold in the Senate, the same as the House--the House wasn't designed to be partisan."

Manchin says 'no' to ending or weakening the filibuster

"The House was designed to be hot as a fire cracker. We were designed to cool it off, and that's the Founding Fathers. It was a brilliant strategy they looked at, so why can't we try to make this work?" Manchin continued. 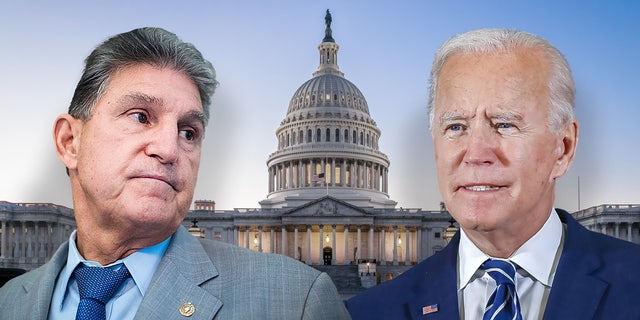 The West Virginia Senator later said there will be "no consistency" in the Senate if there are "violent swings" every time there is a party change in Congress.

Manchin penned an op-ed in The Washington Post earlier this month, stating that he will "not vote to eliminate or weaken the filibuster."

"The filibuster is a critical tool to protecting that input and our democratic form of government. That is why I have said it before and will say it again to remove any shred of doubt: There is no circumstance in which I will vote to eliminate or weaken the filibuster," Manchin wrote. "The time has come to end these political games, and to usher a new era of bipartisanship where we find common ground on the major policy debates facing our nation."

Earlier this year, the progressive No Excuses PAC, whose leadership helped Rep. Alexandria Ocasio-Cortez, D-NY., win her election in 2018, slammed Manchin and Sen. Kyrsten Sinema, D-Ariz., for supporting the filibuster, saying they "stand in the way of progress" and are helping "shrink their own party's pandemic relief, climate, and economic investment plans."

MSNBC host Al Sharpton last month threatened to accuse Manchin and Sinema of "supporting racism" over their support of the filibuster.

"The pressure that we are going to put on Sinema and Manchin is calling [the filibuster] racist and saying that they are, in effect, supporting racism," Sharpton told Politico. "Why would they be wedded to something that has those results? Their voters need to know that."

Cameron Cawthorne is a Fox News Digital editor
Manchin rails against eliminating filibuster, says he's not 'going to be part of blowing up this Senate' | Fox News
Views: 3