SO, REPUBLICANS AND CONSERVATIVES ARE WAGING A "WAR ON WOMEN", BUT THE DEMS, LIBERALS SUPPORT PLANNED PARENTHOOD, ABORTION, GENOCIDE.... AND THE MILLIONS OF BABIES KILLED ARE MOSTLY BLACK, AND MANY ARE GIRLS..... AND, FEMINISTS THINK THAT THIS IS OK?..... DOES ANYONE CARE?

When it comes to sex selection and gendercide, most people think of China, India, and other cultures that are known to prefer boys over girls. But studies show that this unethical practice is happening right here in America.

The ripple effect is destroying girls, with human trafficking and violence on the rise. 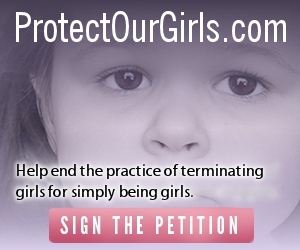 Nobel Prize-winning economist Amartya Sen estimated that as early as 1990, approximately 100 million women were demographically missing worldwide due to sex-selection abortion, female infanticide, and other such practices. Current estimates now put that number at 200 million missing women and girls globally.

U.S. Census data and national vital statistics show that indeed, sex-selection is a growing problem in America. Americans are employing sex-selection techniques in their reproductive decisions. A review of census and birth records by Professor Jason Abrevaya of the University of Texas showed that Americans have sex-selected thousands of baby girls.

Sex-selection abortion represents the most violent form of discrimination against women, victimizing two women at one time: mother and daughter. Many women are forced or coerced to have sex-selection abortions, and their daughters suffer the fatal consequences.

Although 9 out of 10 Americans oppose sex-selection abortion, abortions based on gender are neither illegal nor uncommon in our country. Many other industrialized countries have either restrictions or a ban on sex-selection, yet the United States does not – despite our continuous condemnation of other countries that permit the practice.