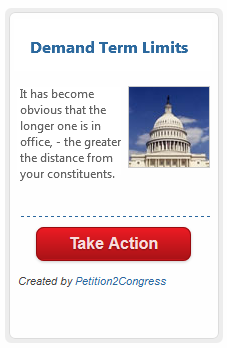 We the People, as your constituents, have made numerous requests of our Senate. When we realized that our elected leaders were ignoring We the People, those requests eventually became demands- only to be ignored yet again.

The audacity of your elitist behavior has lead We the People to question your authority. You seem to have forgotten that you represent We the people, the ones who voted you into office. To put it in simple terms- We the People no longer trust YOU! Your only concern seems to be insuring YOUR OWN place among those Socialist/Marxist elite!

You are making Unconstitutional decisions regarding our Freedoms, our government is involved in illegal gun running, arming illegals and the Muslim brotherhood, yet you would disarm the citizens of the United States, who were given the right to arm themselves particularly against the very type of runaway Government you have now become.

You continue to place the financial burden of your out of control spending on the children of tomorrow, borrowing from tomorrows nonexistent reservoir of funds.